A rare dinosaur attack resolved without incident at a recent Arizona Medical Eye Unit (AMEU) Clinic in Holbrook, AZ.  Greg King, AMEU Director reported a ferocious noise and felt the entire unit shaking for several seconds as the animal pursued its prey.  “The unit is so old I wasn’t sure it would hold up,” he said. 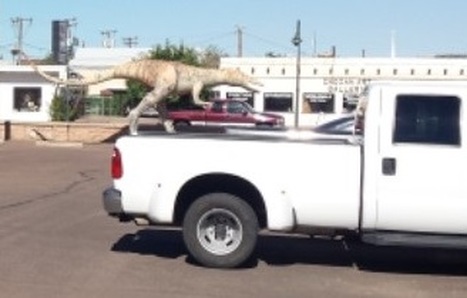 According to paleontologist , Roy Chapman Andrews, dinosaurs have short attention spans and quickly look for easier prey. Fortunately, “Dino” was easily frustrated and tried to flee in the bed of a passing pick-up truck.

Dino was quickly apprehended by local police, detained at a ranch and  avoided Zoo time by taking a plea bargain which allowed him freedom for the requirement that he protect the Clinic in the future.

Any travelers to Holbrook will discover Dino on guard in front of the  Navajo Community Health Center.  AMEU patients will never fear Dino again! 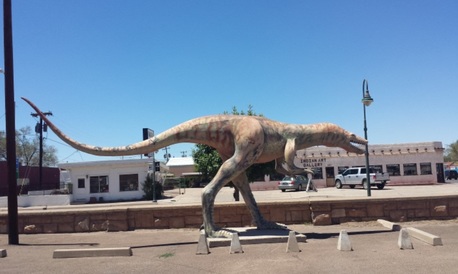 Support AMEU with a gift today to make sure our NEW UNIT can survive any future attacks by pre-historic predators.